“Enthusiasm is common. Endurance is rare.” 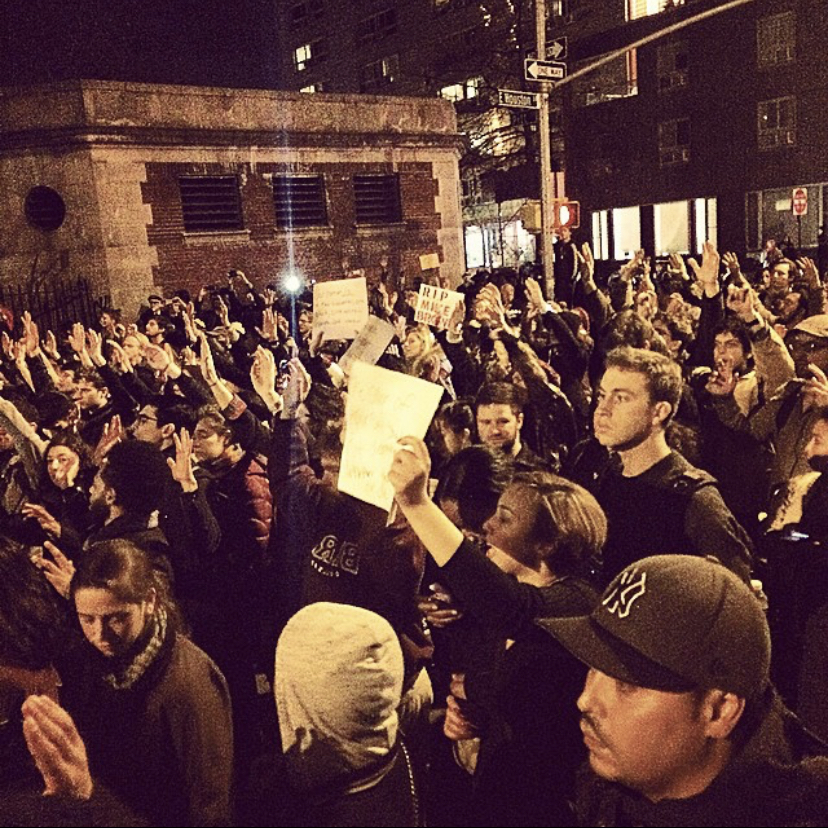 I took this picture on November 25, 2014 during the Ferguson protests in NYC. Almost 6 years later, the words that echo through the streets today sound eerily similar, bringing to light these continuously existing violent acts of police brutality and racism that go unchecked daily.

The undoing of centuries of embedded racism will undoubtedly take longer. It requires work and effort that last well beyond the weeks of protests and anger. It involves using privilege (in various forms: voices, capital) to uplift minorities and the underrepresented, and the determination to shine light on truths that are difficult to confront. To find these truths, we must listen and get educated around the various forms of oppression that have occurred in our history (racism, colonialism, realizing that the police force was created to protect the property of white people). It requires not shying away and taking a real, hard look into the eyes of the nation’s shadow self.

This morning, I was part of a conversation that reflected upon what ways habits and beliefs are passed down from our ancestors. In addition to physical artifacts, we also inherit intergenerational trauma and values, both good and bad. This kind of awareness leads to information, which we can then turn into knowledge that we carry forward into action. While the structural problems we were born into are not necessarily caused solely by *us*, we must still step into radical responsibility: it is our duty to ensure that we don’t continue to pass down generations of toxic patterns. At the very least, the present moment is in our control. In honor of past lives that were unjustly lost, in love for the humans that currently exist in the world, and in responsibility for future generations to come, we must act now.

To illustrate in another way: if a boulder is already rolling down a hill, and no effort is made to 1) stop the existing momentum, and 2) reverse its position, then why are we surprised at the end outcome? In the extreme case, this means passing down / embedding our biases even deeper so that they become harder and harder to disentangle from our actions. This means that eventually, they will be so rooted, that we can no longer introspect on them. This means that even though we are no longer “aware”, they can still manifest in forms of violence, ranging between explicit and subtle, but each harmful in their own ways. That is a terrifying thought.

If we don’t make increasing and intentional efforts to stop this boulder, and choose to blame the situation on gravity / the fact that it was already in motion, we would essentially not only be condoning the acts of white ancestors, but also eventually become the new “ancestors” who perpetrated this problem. We must break out of this vicious cycle of history on repeat, now.

I’ll end this with a quote from Carl Jung: “Without freedom there can be no morality.” When I first read this quote, I wondered if it should be the other way around: shouldn’t fulfilling our ideals of freedom prerequisite a basis of morality? But then, I realized that the freedom that Jung is referencing is not the Americanized notion of freedom, but the freedom from ourselves and our tainted views, freedom through understanding our past and making efforts reconcile it, freedom through acknowledgement of our biases and what lies within our subconscious mind.

Only then, can we achieve morality – but it starts with the self.

Graphic Design Projects
What being in a Facebook group where we all pretend to be ants taught me about politics
Building a Neuron-inspired Intersensory Dome
Food for Thought: My 5-day Fast Experience